Constant temperature constant temperature test chamber often encounters the situation that various equipment can not work normally when doing the test, because no matter what material the equipment is, there will be wear and tear, and the related problems will be different according to the environment. So here today I will study and analyze the fault analysis of the constant temperature and humidity box with you. The following opinions are for reference only.

First: The temperature cannot be maintained. Observe whether the refrigeration compressor can be started during the operation of the test box, and the compressor can be started during the operation of the environmental test equipment, indicating that the electrical circuit from the main power supply to each compressor is normal, and the electrical system There is no problem. There is no problem with the electrical system, continue to check the refrigeration system. First check the discharge and suction pressures of the low-temperature (R23) compressors of the two groups of refrigeration units are lower than normal, and the suction pressure is evacuated, indicating that the main refrigeration unit has insufficient refrigerant quantity. Touch the exhaust and suction lines of the main unit R23 compressor by hand and find that the temperature of the exhaust line is not high and the temperature of the suction line is not low (no frost), which also shows that the main unit R23 Refrigerant deficiency.

Second: The cause of the failure has not been determined. Combined with the control process of the test box to further confirm the cause of the failure, the test box has two sets of refrigeration units. One is the main unit and the other is the auxiliary unit. When the cooling rate is large, the two groups of units work at the same time. At the beginning of the temperature maintenance stage, the two groups of units still work at the same time. After the temperature stabilizes initially, the auxiliary unit stops working, and the host group maintains the temperature stability. If the host group R23 leaks, the cooling effect of the host group will be insignificant. Since the two units are working at the same time during the cooling process, there is no phenomenon that the temperature is not stable, and the cooling rate is indicated to decrease. In the temperature maintenance stage, once the auxiliary unit stops working and the main unit has no cooling effect, the air in the test chamber will slowly rise. When the temperature rises to a certain level, the control system will start the auxiliary unit to cool down and lower the temperature to the set point. Near the fixed value (-55 â„ƒ), then the auxiliary unit stops working again, and the fault phenomenon as shown in Fig. 3 will appear after so repeated. So far, it has been confirmed that the cause of the production failure is the leakage of refrigerant R23 of the low-temperature (R23) class unit of the host group. The leak detection of the refrigeration system was checked by a combination of a leak detector and soapy water, and it was found that the stem of a hot gas bypass solenoid valve was cracked by a slit of about 1 cm. Replace the solenoid valve, recharge the system with fluorine, and the system is operating normally. As can be seen from the above, the analysis and judgment of this fault phenomenon are basically easy to difficult. The analysis and judgment of the "outer" then "in", "electrical" and then "cooling" are familiar and familiar. Understanding the principle and working process of the test chamber is the basis for analyzing the fault and judging the fault.

According to the above analysis, only the deep understanding of the working principle and working process of the constant temperature and humidity test chamber can quickly solve the problems that occur during the operation of the test chamber. I hope that the analysis of the fault analyst of Beijing Yashilin constant temperature and humidity chamber engineer will enable you to engage in environmental equipment management, operation and maintenance personnel to solve the problems in the future more smoothly.

Past research has shown that standing on hard ground for long periods of time can be detrimental to workers' productivity and health!
A simple truth everyone knows -- he's not feeling well!
On a more complex level, standing on a hard surface for long periods of time is uncomfortable -- because your leg muscles become stationary and stiff, and your body is contorted by constantly trying to stay upright.
In the short term, it reduces the natural flow of oxygen and blood back to the heart, resulting in fatigue and lower limb morbidity.
Standing for long periods of time can cause varicose veins, lower back pain, leg pain and other common ailments.
The most practical and comfortable way to effectively eliminate the pain and suffering of standing workers is to use well-designed anti-fatigue floor MATS.
These ergonomic products can have a huge impact on injury prevention -- improving workers' posture, reducing feelings of fatigue, and increasing productivity.


Anti-fatigue floor mat, gradually improve the delicate movement of thigh and calf muscles; As muscles contract and relax, their blood flows back to the heart and the lower extremity burden is removed, which can combat standing fatigue for long periods of time. 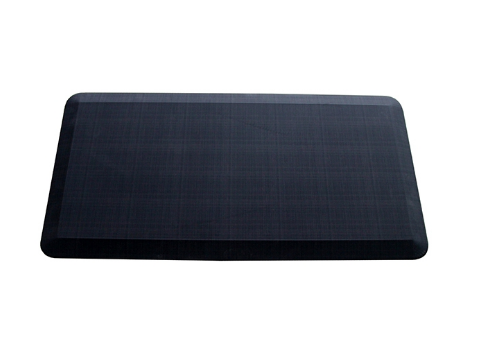